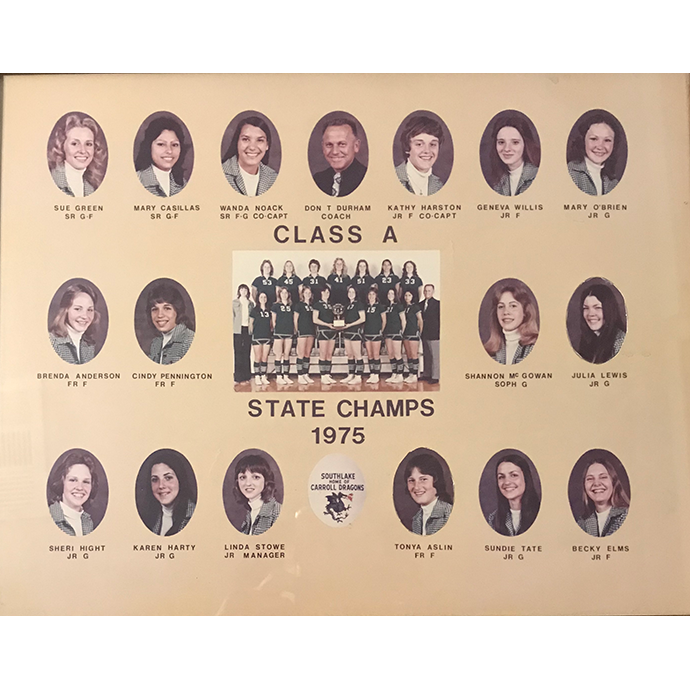 Although their state title came at a time when much in sports was different, there is no sport that has changed quite as much as girl’s basketball.  Girls basketball teams played 6-on-6 basketball. Three offensive players played against three defensive players on each side of the court and no player was allowed to cross mid court. When defenders gained possession of the ball, they had to pass it across mid court to their offensive teammates. Representing a town that didn’t have a stoplight, playing a game that few remember, and led by a man who maintained a flattop haircut, these ladies achieved a first in Carroll history – a State Championship.  Led by Coach and High School Principal Don Durham, one of the foundational cornerstones of Carroll ISD, the team had come close before – suffering a heartbreaking loss in the championship game just a few years earlier. When the players arrived in Austin for the championship game, they were greeted by a group of Southlake fans that had slept on the track at the University of Texas campus the night before. With the backing of the entire town, this time they would not be denied. These ladies were determined to make sure such support would not be in vain. It was incredibly hard-fought: the score was tied seven times, the lead changed hands eleven times and their opponent led by as many as four points. It took triple overtime, but in the end, Carroll emerged victorious. These young ladies set the benchmark for what would later be called “the Tradition” and brought home the title. The team finished their year 25-9 and left Gregory Gym knowing that no matter how many state titles Carroll would go on to win, they brought home the first.

They started Carroll’s championship pedigree when Southlake Boulevard was a two-lane road simply called 1709, Town Square was a hay field, and the economic impact of DFW Airport had not yet been realized.  It is with great pride and better memories the 1975 Carroll Girls Basketball Team is inducted into the Carroll ISD Athletic Hall of Honor.